You Can Say Anything satire gauges kids’ reactions to Trump

At a time when Donald Trump’s policies affect millions of children, a new book, You Can Say Anything, reviews quotations from President Trump and asks the question: “Can the words of Donald Trump inspire our children?” The satire, more for adults than children, explores the possibilities. And while it contains plenty of Trump’s controversial quotations, it also sets the stage for a more positive path to the future through grassroots civic engagement and lessons children teach Trump about moral behavior.

“We didn’t want to just complain about the challenges our country faces with divisive leadership” says co-author B.B. Larsen. “We wanted to take this gut wrenching national experience and offer some hopeful sign of better things to come.”  Adds co-author/illustrator Robert Thibeault, “We put our hearts into this, like so many friends across the country, feel there has to be a better way to get things done.”

Children, Trump, and the news

With daily news telling of impacts that will be felt by children for years to come – from decreased health care coverage, to environmental deregulation, to separation of immigrant children from their parents – the stage is set for genuine concern about the future for the next generation. “We’re both fathers,” says Thibeault. “And like all parents we want a better future for our children. But now, it’s a daily dose of bad news, driven by Trump’s appeal to fear and anger.”

But the same concern can lead to hope. “As children grow, they develop a sense of empathy for the world,” says Larsen. “They care about the people and places around them, and learn to work together.” Though that doesn’t always happen. “Some adults can grow up with stunted moral development…but we think even those adults can learn,” says Larsen. “Our suggestion through the book is that President Trump can learn too…if he can follow the example of children.”

Some topics too controversial

The book covers an array of challenging topics, including some of Trump’s statements about women, the disabled, and anger toward protesters. It even includes sporadic appearances by Vladimir Putin, who pops up in places throughout the book. But some statements by Trump were just too controversial. As the authors were testing out titles for the book, they posted a version on Facebook with a title drawn from President Trump’s quotation about how he could grab women because he’s famous. “Our Facebook feeds nearly blew up,” says Thibeault. “Friends and family were saying it would be a career-killing move,” and called into question years of education. “It was as if I had said the quote myself. But it wasn’t me – it was the President!” explained Thibeault.

And while the book isn’t for kids – the cover displays a caution: “Warning: Contains quotes from Donald J. Trump not suitable for children” – it carries a message of hope delivered by a sea of protestors and the character of Barack Obama. “We took great hope from the positive messages of protesters,” says Larsen. “We wanted to end the book on a more hopeful note, and protest signs provided the content.” From”The American Dream is Big Enough for Everyone” to “Build Kindness Not Walls,”  these messages, along with quotations from President Obama, end the book in more positive territory for the kids who are reacting to Trump’s quotations throughout the book.

Building a story from quotations

The book revisits in a unique way President Trump’s quotations that came to life during and after the election. The book weaves quotations together in three sections – in the introduction, a Steve Bannon character appears on a playground bench and invites children to come over and learn some lessons from President Trump. The children listen and respond to Trump’s quotations on topics ranging from fake news to his suggestions on how to lie and engage in name-calling. Finally, more positive messages delivered by Barack Obama and protesters lead to the more hopeful conclusion.

The book ends with a Presidential Report Card to gauge the extent to which President Trump learns new behaviors from the children, with a ready-to-go form available for free on the book’s website at http://phonymoralguidance.com/resources

Authors Larsen and Thibeault’s roots span the range of voters drawn into the election. Both live on the East Coast now, while Larsen grew up in Nebraska, South Dakota, and Minnesota. Thibeault grew up in a working class community in central Massachusetts. “There’s too much division in our country,” says Larsen. “Our hope is that this book can use humor to turn some of the anger found in President Trump’s words into determination to make things better for families across the country.”

<Press info: to request a review copy or for additional information, please use the Contact form found at: http://phonymoralguidance.com/contact/> 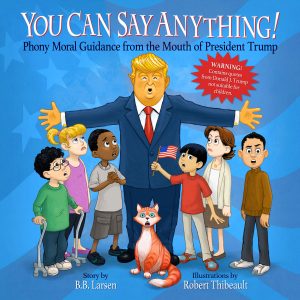 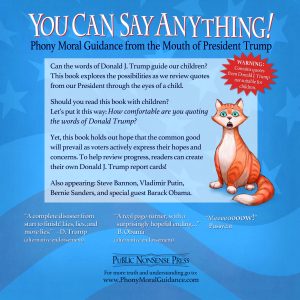 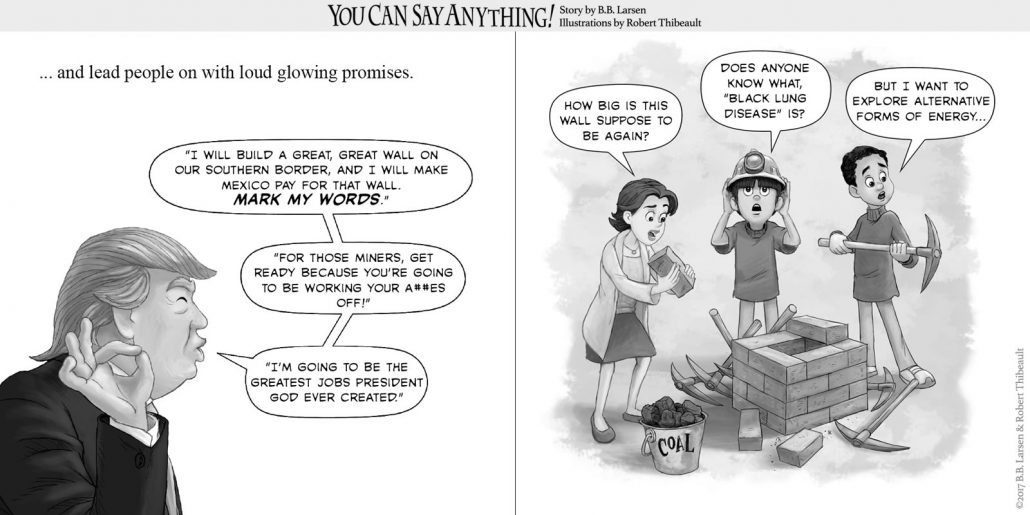 Advice on safe borders and energy 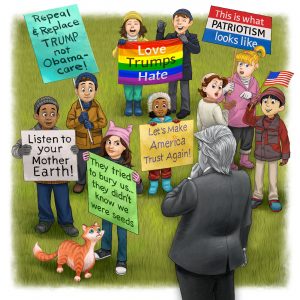