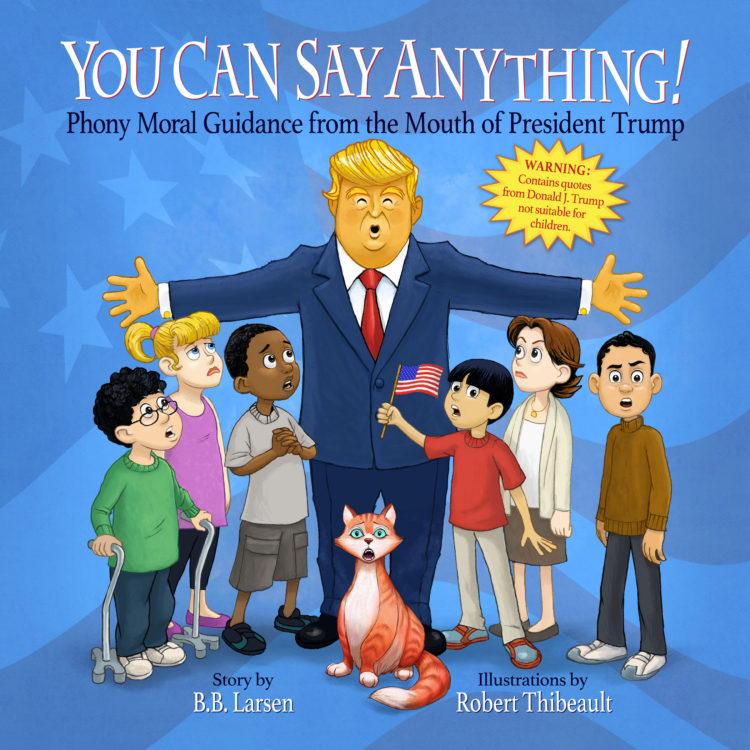 Trump…and children. When Bob and I set out to write this book, we felt it was a stretch to see the morally ambivalent Trump through the eyes of children. And yet, here we are, now — Trump floundering with one heartless policy after another directed at children. Separating children from their parents, detaining them in cages, detaining families indefinitely — all for political manipulation so he can feed the anger and fear that drives his base. About as un-American (and inhumane) as you can get.

Through all Trump’s turmoil, we wanted to end the book on a more hopeful note. One of the few hopes we saw was a more positive, caring generation of youth who will eventually replace us. We ended the book with an image — a group of kids working together for a better world. They are planting a tree as Trump looks on in bewilderment, a small figure on a distant horizon.

Would the emotionally stunted Trump learn anything from the children who demonstrate a more caring view of the world? As Bob crafted the final page and filled it with so many subtle emotions, we wondered — will Trump learn? Could Trump learn from children who are more emotionally developed than him? We didn’t know. He has a blank look in the illustration.

Now it’s clear, he cannot learn. The basic seed of empathy that grows in most children is missing in him. He crossed the line, and rather than stepping back, expressing regret at least on some aspect of his policies, he blusters ahead, rallying more fear and anger.

We are still hopeful that despite all the wrong directions being thrown at the next generation, they will grow with our caring, that the decency of most Americans will outgrow the fear of the few. 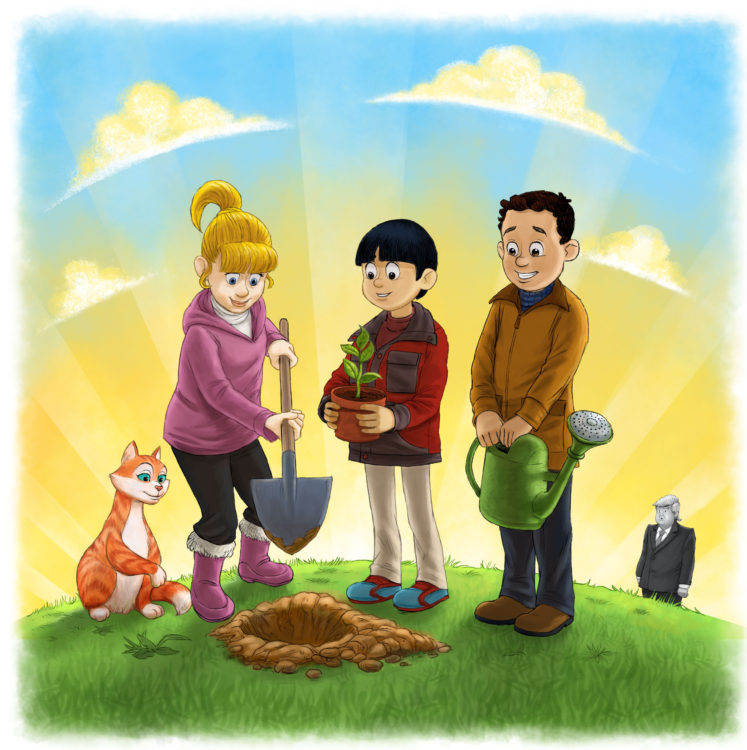 Buy or Give the Book

Rob and I hit the ground running after we hatched the idea for this project after the election. But it takes work to zero in on just the right image, and my credit to Rob for transforming my very (very) bad sketch into something that resonates.  You can trace the evolution here, starting with the final cover, and then jump back to the start and tracing forward… 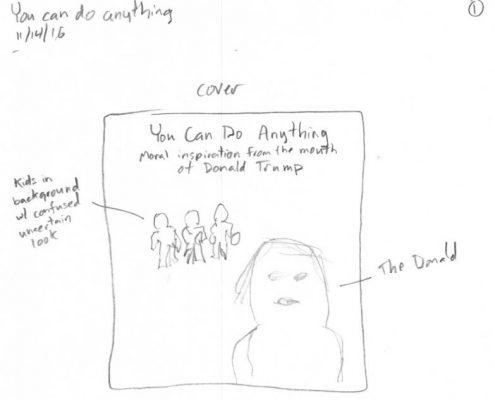 My bad sketch to Rob… 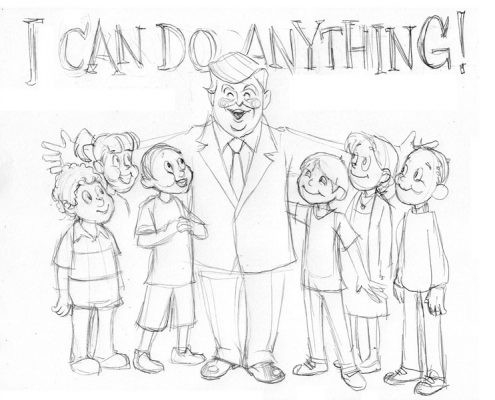 Rob sketches it out… 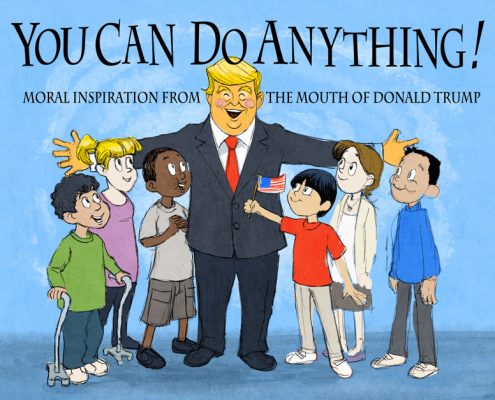 Nice! But people are confused. Why so happy? 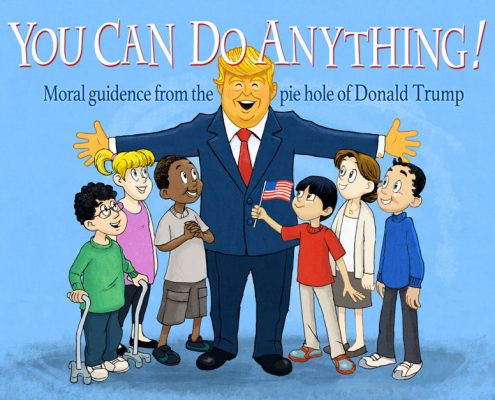 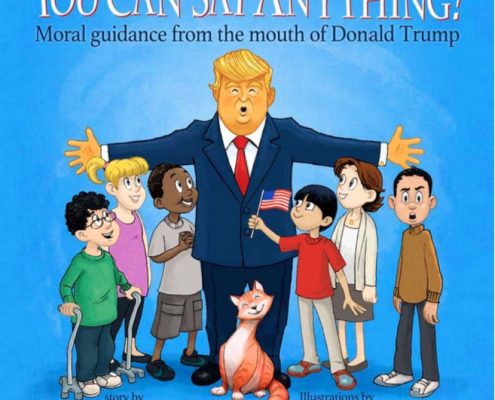 Getting there with the boy on the right… 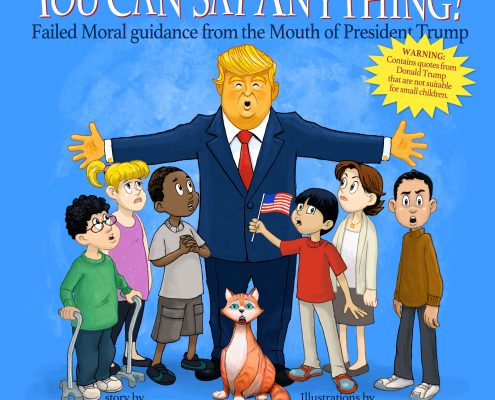 Yes, there we go!

It was a few days after the election, and I was despondent. “How could this have happened? It can’t be real…”  Like I had been punched in the gut, and the future only seemed to look worse as we anticipated Supreme Court selections, Congress, healthcare, etc.

On Facebook what had been cheerful posts from friends wearing pantsuits turned darker, despondent and hopeless. In the midst of that, I threw my hands in the air — what can I do?  There’s nothing…nothing…

So I started writing a list of crazy things I could do. Things so improbable and nonsensical that there would be no possible response to pull me down. And I posted it as a joke Facebook: “I’m going to write a children’s book based on the words of Donald Trump.”

But I kind of liked it. It made me smile. And my friend Bob Thibeault, whose illustrations I’ve admired for many years, liked it too. We sent some quick messages back and forth — yes!  We’re going to do this!  So we got started…